Our day started very early in the morning. Excitement kept most of us up through the night, and it seemed like the only thing anyone managed to say that morning was "I can't believe it's finally here." After some tough goodbyes we went through security, boarded our plane, and were off to Minneapolis. We enjoyed (some might say endured...) a pretty long layover in Minneapolis, which was made even longer when the plane that was supposed to take us to Atlanta was delayed. When we made it onto the plane to Atlanta we began to prep to catch our next flight. Before the delay we were supposed to have about an hour once we landed to go through the airport and get on our next flight to Quito. Now, because of the delay, we had about 10 minutes. One of our group leaders was sent ahead of everyone to try and get someone to hold the plane. Luckily they got their soon enough and we were able to board the plane. We were finally on our way to Ecuador.

Since the plane ride took place very late in the evening it was very dark and uneventful. Outside was nothing but black. Then, one small orange light. Then another. And another. Before I knew it, beneath us was a sea of orange lights. Not bright and clear like most North American city's at night, but fuzzy, blurry - as if covered by clouds. We touched down in Quito around 11:00pm and made our way through customs. We did our best to be alert, but we all showed signs of a long day of travel: sleepy eyes and frizzy, messed up hair. On the other side of customs we were greeted by a lovely little sign that said "Me to We - Girl Guides! :)". Holding the sign were two young women - Lily and Lydia. Lily and Lydia were going to be our facilitators for our entire trip. What's a facilitator you ask? A facilitator is the person who works for Me to We and travels with you wherever you go. They organize evening activities and also work as translators. We followed them outside, found our little tour bus, loaded up our bags, and off we went.

I didn't really know what to think about the first time I drove around Quito. It was night time and obviously dark. I was also really tired from a long day of travel. Still, Quito had a different feel that I wasn't quite expecting. The clouds had moved in and settled in the streets. Mix that with the yellow-orange glow of the streetlights - it made for an eerie scene. We were given some super yummy pizza for a late dinner. It was a little cold, but had no sauce. Being a person who has a great dislike for anything saucy or tomato-ey, it made me (and my stomach) very happy. While trying to reach our hotel, something happened ahead on the road and traffic had come to a complete stand-still. People would get out of their cars, talk to each other, get back in. Other people would in between the cars, either on their own, or with animals. An ambulance was behind us, sirens wailing, trying to get through. The tiny little ambulance, with its back doors flapping open, made it a little further before deciding to drive over the curb and boulevard into the opposite direction of traffic. That was when I confirmed I definitely did not want to get injured on this trip.

It took a little while, but eventually traffic began to move again. Since our bedtime was going to be delayed as we wouldn't make it back to the hotel for quite a while, Lily and Lydia decided to go over some rules and information on the bus. Rules are never that fun, but getting it over with and being able to sleep in tomorrow was pretty pleasant thought. We discussed Group A/B rules (Me to We's basic trip rules) as well as some safety and health things. One big talk we had was about altitude sickness. Where we live in Canada is about 240m (approx. 787 ft.) above sea level. Quito is at about 2,800m (approx. 9,350 ft.) above sea level. Big difference. Those of you who are familiar with your Gas Laws (specifically Boyle's Law: P1xV1 = P2xV2) would know why...

{{{INSERT RANDOM SCIENCE LESSON - Not necessary, but cool.
Boyle's Law says that as pressure increases, volume decreases, and as pressure decreases, volume increases. The percent of oxygen molecules in the air is about 21%. Imagine you put 21 drops of food colouring into a glass of water. You'd be able to see it, right? Now, as you increase in altitude, the air pressure decreases. As pressure decreases, volume does what?.... That's right! It INCREASES. Now imagine putting another 21 drops of food colouring into a pool - you wouldn't notice a difference in the colour of the water. The oxygen molecules in the air are still present, they just aren't as concentrated as they are near sea level. Pretty neat, huh! Now back to the altitude sickness talk:}}}

We were told different signs to look out for: headaches, nausea... I was lucky enough to be one of the few girls to keep altitude sickness at bay. I heard that if you are more physically fit/play sports that you are less likely to encounter altitude sickness (Woot, woot! Go dancers!), but the one thing that we were constantly (and I mean CONSTANTLY) told to do was drink water. We saw our fair share of Ecuadorian bathrooms because of it, but it really did help.

We eventually made it into the heart of Quito, and to our Hotel. The Hotel San Fransisco didn't look like much on the outside, but on the inside it had an adorable lobby that reminded me a lot of the Winnipeg Zoo Conservatory. We divided into groups and went up to our rooms. We unpacked, washed up and hopped into our beds. It took a while before anyone went to sleep, for most of us talked into the early hours of the morning about what on earth we might experience tomorrow... 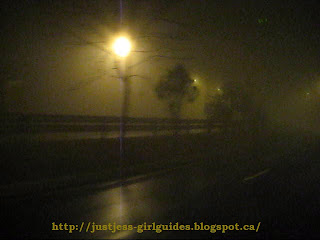 Jess
Hello there and thanks for visiting my Blog! My name is Jess and I have been a member of Girl Guides of Canada since 2001. I absolutely love earning, trading and collecting badges and crests. I hope you enjoy my Blog and that you continue to visit!

Send me an email: justjesslynns@gmail.com